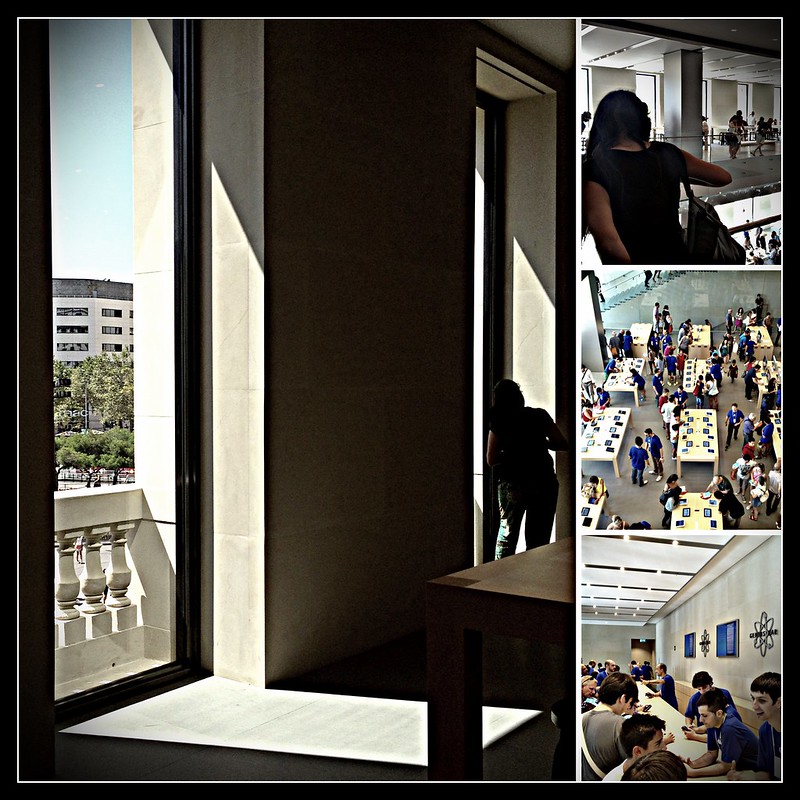 b: iphonography = fast food photography
it sells well not because of its gourmet taste, but because it’s very easy to make/consume.
while fast food is full of artificial taste additives, iphonography is processed by apps to make it more ‘tasty’ …

fp: I like some german white wines but I could not even think to write a critic about them. That’s what’s happening. People who read and ‘retweet’ things about other things without going deeper. What it is similar to fast-food is the superficial knowledge of Googled-times.

Photography, today more than ever, is a mixture of all styles and technics from the past. Daguerrotypes are not ‘truer’ than an Instagram-filtered snapshot. It’s a so prehistoric pov than remembers me, precisely, when photography was ‘guilty’ of copying hyperrealistic painting. What it’s interesting about mobile photography is its ubiquity and the multiple creative postphotography possibilities. And that’s already changing the face of DSLR cameras also. Annie Leibovitz knows that.

Could I say my photo is truer because it was shot with a full-frame camera than another one, shot with an smaller&noiser APS-C sensor? It’s funny, specially when I’m tired of watching bad photos by DSLR users -focus, dof and exposure mainly- but it’s not strange when they use them as mere point&shoot automatic devices. It’s a matter of concept. And to get the most of a concept it’s good to rule the tools. In the other hand, there are, sometimes, good ideas badly pictured and null ideas well photographed.

Is an unedited at all photo better than a heavily-apped one? I enjoy making both of them. Are editors&appers good photographers? Was modern photography unretouched?
Again, cameras don’t make photos. It’s the photographer pov and technique. One popular confussion due to the success of lomo-like filters is to associate, let’s say, a pic of an apped cup of coffee with a ‘good’ photo.

b: I have a question: why does it matter to you that we know that these (and some other recent) photos were taken by iphone when you’re normally hiding camera info of your photos?

You said (probably referring to Flickr uploads): “… I’m tired of watching bad photos by DSLR users -focus, dof and exposure mainly- but it’s not strange when they use them as mere point&shoot automatic devices”. Isn’t iphone also p&s camera that barely has controlled functions like more complex cameras? And do you think that the quality of Statigram pics is so much better than what you find on Flickr? Honestly speaking, I was very disappointed when I was browsing there.

I’m lately stating in some way how an image was shot basically for two different reasons:
-there are different people interested in different kinds of photography;
-it’s much more difficult shooting interesting traditional photography from a mobile device;

With an iPhone or with a ‘more complex camera’ you can control nothing and use them in automatic -or almost- mode or you can also use them practically in manual, measuring and locking in different steps focus, exposure, white balance, films and format.

It has nothing to do with tools, it never had.

This is a new article I’ve just found and consider it very good: its-not-ab.

Unlike others, I do not consider some ‘social’ places ‘better’ than others because:
-that’s ontologically impossible;
-different publics ‘consume’ and/or ‘produce’ the same inputs in a different way;

Finally:
–Statigram is just a web viewer with Instagram‘s API;
–Flickr was a nice photography-based place (by the way, what does that means?) but it’s already paralyzed and trying to re-define itself (let’s look at Marissa Mayer’s recent announcements);
-“I like some white german wines but I could not even think to write a critic about them“.

"dear fernando:
the beauty is always in the pleats of the sounds.
i wish you the very best.
warmly,
(ryuichi sakamoto)"

dear fernando: the beauty is always in the pleats

the beauty is always in the pleats of the sounds.
i wish you the very best.